Fight the Coronavirus during the Wuhan quarantine.

A game written during COVID-19 pandemic, telling a sad story of struggle, tenacity, and also hope with some bits of public inconsistencies too...

It is a tactical memory game, built as a documentary,  where you Follow Doctor Li, and relive the early days of the Coronavirus epidemic.

Contain and cure 5 different types of viruses, only with your memory and a little bit of strategy.

What is coming next :

The story mode is pretty much complete. However, depending on the reception, more might come :

The story behind the game :

The idea of the game emerged on the 2nd of January 2020, 10 days after the beginning of Wuhan quarantine.

We had been witnessing the early days of the epidemic unfolding, such as the quarantine, the prejudices against Chinese-looking associated with the #IamNotAVirus hashtag, the iconic death of Li Wenliang...  We realized that there was a story to be told.

But a few weeks later, we also experienced a kind of denial in our countries : "It is just a flu". There was a message to pass!

The first edition was published on the 11th of March, 5 days before French Confinement. But also 3 weeks too late to be of any use for prevention... However we still thought that the main message of encouragement "Jia you!" was more important than ever.

In the following weeks, we kept improving the game. And the 10th of May, the last day of our confinement, it was important to us to add a new  layer of narration through the achievements : retell our own experience of the confinement. With a 7-weeks shift, it creates a surprising symetry with Wuhan's.

As we publish this version, the 10th of June, players might be fed up with the Coronavirus and prefer to move on. But maybe that, in a few month or in a few years, it will be interesting, pleasant, or even salutary to come back  to relive those crazy months.

Read more about the "Story behind the game" in the devlog. (More is coming....)

I'm not used to this kind of game but the progression curve and the arrival of new mechanics are well done. I like to see the story of this guy told through a game, I can't wait to see the end of the story 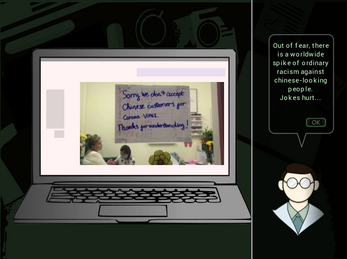 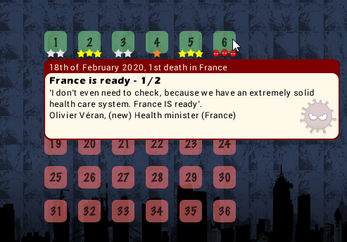 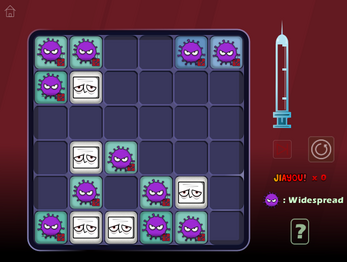